I have been closely following the debate over SB-277, the bill that would remove California’s personal exemption for the requirement to vaccinate children before they can attend school. This bill was sponsored by Senator Richard Pan, a pediatrician from Sacramento, and Senator Ben Allen, a former school board president of the Santa Monica-Malibu Unified School District. (Info available here.)

My interest in public health is longstanding. In the 1980s I worked as an analyst for the Washington State Department of Social and Health Services. I have been a university science editor and writer for many years. I served on my local school board in Albany, CA, from 2002-06. Currently I am serving on the Albany city council.

During the Senate Education hearing on SB-277, you were quoted in the San Jose Mercury News. I read the quote several times because I couldn’t believe that you would make such a statement. I even wrote to your office to request a confirmation, but I never heard from your staff.

However, I did get confirmation from an article in the Sacramento Bee, which quoted you making the same statement (here). According to the Bee:

Support for the bill from a wide range of educational groups was not enough to break the impasse. While the formidable California Teachers Association is holding off taking a position, other school organizations have lined up behind the premise that children must be able to attend school without fear of disease.

That argument failed to convince a majority of lawmakers on the Education Committee, including Democrats.“I’m looking for the compelling state interest here in doing something as draconian,” said Sen. Loni Hancock, D-Berkeley, because “as I read this bill, there’s nothing you can do if you choose not to vaccinate your child except personally home-school them.”

Let me be clear: Your statement on SB-277 shows a degree of ignorance and cowardice that I find difficult to comprehend. You caved to the irrational thinking of the anti-vaccers. If you and your senate colleagues continue on this path, the result may be more dead children.

You do not see a “compelling state interest?” Please let me show you a historical example from your own district. The Sunset View cemetery is at the top of Fairmont Street in El Cerrito. There is a section of the cemetery, next to the Viewpoint Garden, devoted to the graves of children. I’ve could have provided many more photos, but below are eight images of “facts on the ground.” 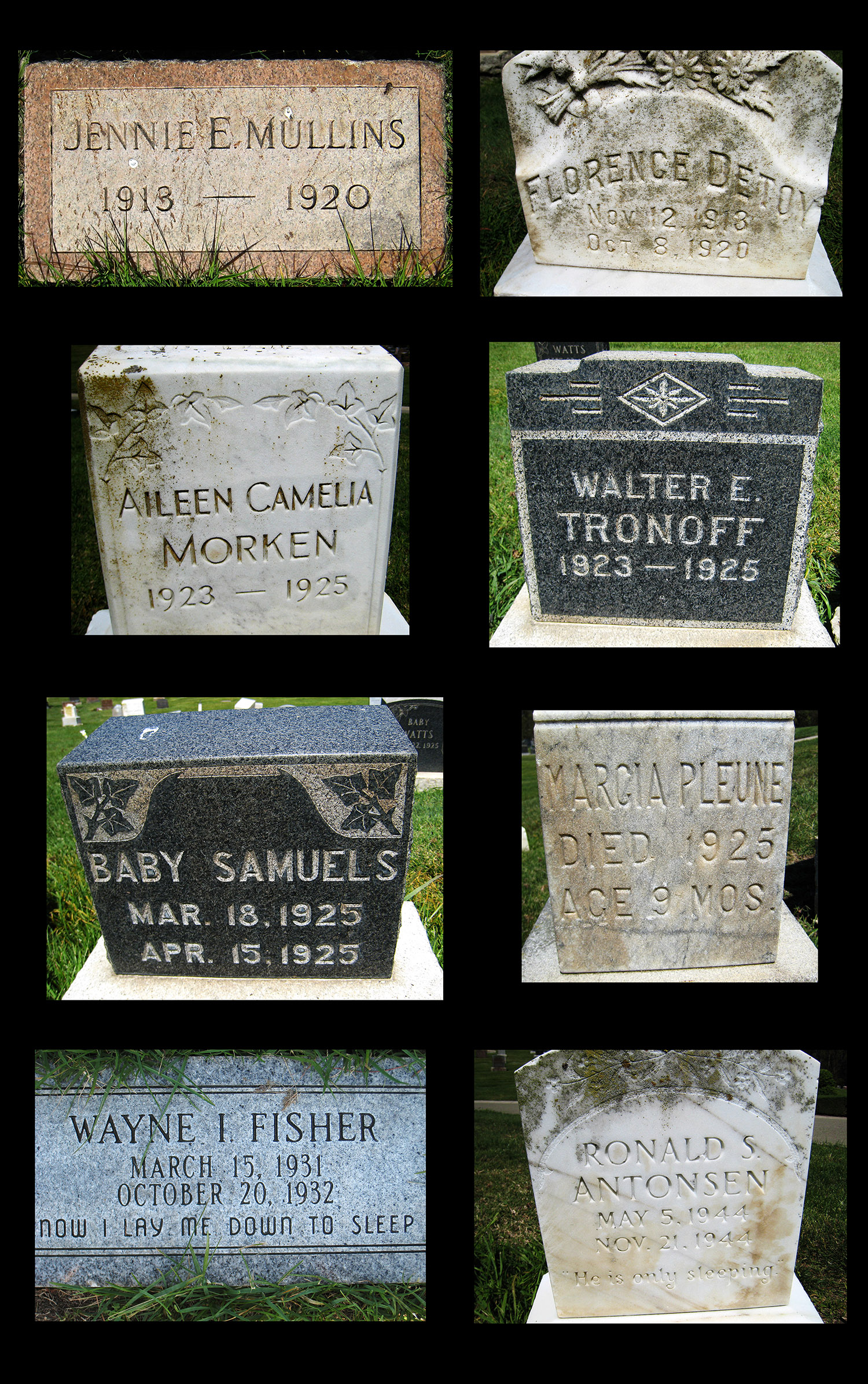 Note that most of these grave markers predate WWII and the widespread use of vaccines. There was a dramatic increase in life expectancy in the United States during the 20th century, but it was due not so much to people living longer, but from fewer people dying young. This dramatic improvement was also not due to doctors and the medical profession, but to public health–especially the triad of better nutrition, sanitation and vaccination. Some good historical footage is available here in this NY Times video.

As for your statement about “draconian” laws: personally, I find the laws of nature draconian. Here is a Mayo Clinic video showing an infant in a hospital intensive-care unit. The child has pertussis, or whooping cough. This disease killed 10 infants in California during the recent pertussis epidemic. The rise in cases is due to both falling vaccination rates at the waning of immunity, which requires a booster shot. The video is 2 minutes 23 seconds long. Please watch the whole thing. Here is another example.

You also made the following statement: “as I read this bill, there’s nothing you can do if you choose not to vaccinate your child except personally home-school them.” It’s not that simple. Let me explain:

What SB-277 strives to do is tighten up California’s lax vaccine exemption rules and make them more consistent with other states. There is nothing draconian about this. Furthermore, the changes brought by SB-277 are completely consistent with settled law. See this thoughtful Supreme Court decision, Prince v. Massachusetts, 1944. Justice Rutledge, writing for the majority, states:

The right to practice religion freely does not include liberty to expose the community or the child to communicable disease or the latter to ill health or death.

But the family itself is not beyond regulation in the public interest, as against a claim of religious liberty. (Reynolds v. United States, 98 U.S. 145; Davis v. Beason, 133 U.S. 333.) And neither rights of religion nor rights of parenthood are beyond limitation. Acting to guard the general interest in youth’s wellbeing, the state, as parens patriae, may restrict the parent’s control by requiring school attendance, [n9] regulating or prohibiting the child’s labor [n10] and in many other ways. [n11] Its authority is not nullified merely because the parent grounds his claim to control the child’s course of conduct on religion or conscience. Thus, he cannot claim freedom from compulsory vaccination for the child more than for himself on religious grounds. [n12] The right to practice religion freely does not include liberty to expose the community or the child to communicable disease or the latter to ill health or death. (People v. Pierson, 176 N.Y. 201, 68 N.E. 243. [n13] ) The catalogue need not be lengthened. It is sufficient to show what indeed appellant hardly disputes, that the state has a wide range of power for limiting parental freedom and authority in things affecting the child’s welfare, and that this includes, to some extent, matters of conscience and religious conviction.

The recent measles epidemic in California has been declared over. Fortunately, no children died, unlike the horrific measles epidemic of 1991 in Philadelphia, which killed nine children, six them from fundamentalist churches which did not believe in vaccination.

There was a young doctor who was working in Philadelphia at the time, and never forgot the experience. His name is Richard Pan. He is the co-sponsor of SB-277.

Here are three editorials in favor of SB-277 from the San Jose Mercury News, the Sacramento Bee and the San Francisco Chronicle.

Your concerns about SB-277 don’t seem to be consistent with those of your district. By 2017, UC Berkeley, along with the other UC campuses, will require vaccinations for enrollment.

Based on my experience as a school board member, I can assure you that a student’s right to a public education does not trump the rights of other students to be safe. I attended many expulsion hearings when on the school board, mostly to rule on the fate of students who were fighting or bringing knives or other weapons to school.

As the history of contact between the indigenous peoples of the Americas and Europe has shown, European diseases were far more deadly than European guns and swords.

One of the most brutal diseases, one that killed millions of indigenous Americans, was smallpox. That disease has been eradicated thanks to vaccines. We are close to eliminating another ancient scourge, polio. But the vaccination campaign is being thwarted in two regions of the world, Northern Nigeria and in the tribal areas of Afghanistan and Pakistan, by the violent Islamic groups Boko Haram and the Taliban. These groups are anti-vaccine and have killed many public health workers, mostly women. I guess the anti-vaccine movement makes for strange bedfellows.

In 1992, on the 500th anniversary of Christopher Columbus’s voyage to the Americas, Berkeley put a new twist in its official calendar, according to TIME magazine. Berkeley inaugurated “Indigenous Peoples Day,” to take the place of Columbus Day.

Said the Berkeley mayor at the time, “Columbus Day celebrations have been ‘Eurocentric and ignored the brutal realities of the colonization of indigenous peoples.'” The brutal reality included smallpox and many other diseases that we have either eliminated or controlled with vaccines. The name of Berkeley’s mayor in 1992? Loni Hancock.

Senator Pan’s SB-277 is a good bill. Pan certainly doesn’t deserve the death threats he has been getting. At an ugly, contentious education committee meeting, you caved to pressure from the anti-vaccers and attempted to throw him under the bus. To his credit, Pan picked himself up, dusted himself off, and asked to work with you to perfect the bill. I hope you accept his offer.

You would do well to follow the example of Assemblywoman Lorena Gonzalez, D-San Diego, who, with decency and common sense, told the Sacramento Bee that parents who are unwilling to vaccinate their kids should be prepared to forfeit public school and home-school their children.

“Quite frankly, if you want to live … as a productive member of society, there are obligations and requirements,” Gonzalez said. “I am comfortable with the home-school option.”