Now that I am finally retired, it is time to get back to blogging. Since it’s been so long since I last posted, there are six items that I want to mention, more or less in chronological order (from old to new) and in order of brevity (from short to long):

The cross is an issue that the council has been dealing with for about three years now. Due to the lawsuit, the city staff and council members cannot comment on the issue, which is frustrating for both Albany residents and the council. I can tell you that the lawsuit is now in federal district court and there should be a resolution within months, not years. I can also share with you public information about the schedule. The latest information is that the initial case management conference is set for Dec. 14, 2017, before Judge William Alsup.

The city issued a request for proposals (RFP) to help the city formulate a rent review ordinance, but the response was disappointing. City staff have been in contact with organizations that could meet the requirements of the RFP, and it will be issued again with more efforts to notify potential applicants. There is a good review of Bay Area rent review efforts on page 1 here, written by Barry Miller, who coincidentally was the planning consultant for our general plan update.

The Albany Community Resource Center opened its doors for the first time this past Friday, September 8, and will now be open every Wednesday and Friday from 10am-1pm.There was an open house on Friday, September 29, part of Albany Local Week. I attended the opening and was impressed by how much work the staff have put into creating the center, and by the generosity of the Albany United Methodist Church for providing the space. Information on the Community Resource Center can be found on the city website here.

In California the campaign spending of council candidates is public information, and it is available on the city’s website here. Candidates must file the state’s Fair Political Practices Commission (FPPC) form 460 to report contributions and expenditures if they form a campaign committee or if they plan to receive or spend $2,000 or more.

In the November 2016 Albany city council race, three candidates filed form 460s. Here are the contribution and expenditure amounts for each (page 3, lines 5 and 11):

Note that some contributions came from the candidates themselves. For example, all but a few thousand dollars of Pilch’s expenditures were funded by him.

The remaining two candidates, Amber Whitson and me, filed FPPC form 470s because we didn’t anticipate receiving or spending $2,000 or more. We were not required to file documents detailing our contributions or expenses. I have no information about Whitson’s spending. However, I did keep close track of my own campaign finances, and here are the figures:

Basically, I recouped my costs for literature and postage. I did not recoup the cost of my official ballot statement, which for all candidates is $978. I find it annoying that the state charges candidates so much, since the expense discourages democratic participation. For my campaign, my strategy was simple–spend as little money as possible and still come in third in the vote count, which is what I accomplished.

In the fall of 2018, two council members, Peggy McQuaid and Rochelle Nason, will be up for re-election. In 2020, Pilch, Maass and I all well be termed out, so three new board members will be elected then. I am hoping Giesen-Fields runs again. He was a good candidate and I think he would be a good council member.

Homeowners in Albany have just received their new property tax bills. I have written a previous post (you have to scroll down a bit) about how to read your property tax bill. I’ll put up my new bill and compare it last year’s (see below). You can click on the images to enlarge them, and click the back arrow to return to the text. Note that 2016-17 is tinted blue, while 2017-18 (the bill we just got in the mail) is tinted pink: 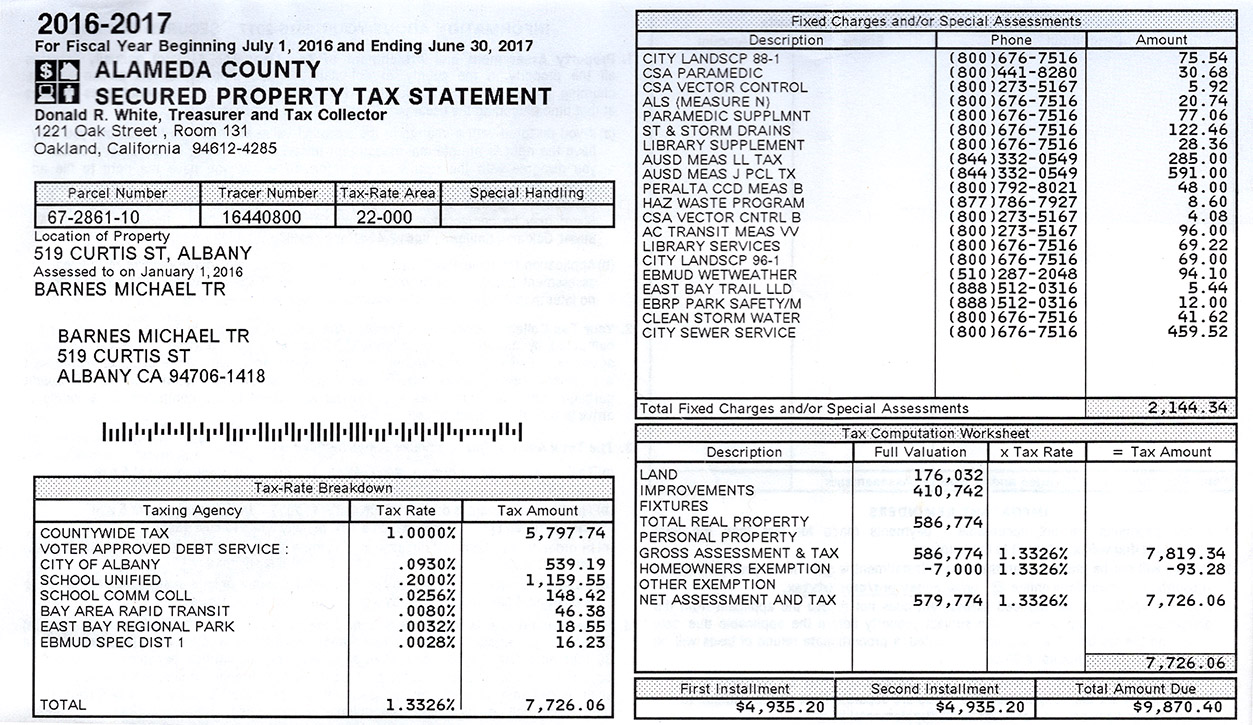 On the left hand side of your bill are the ad valorum taxes, which are based on a percentage of your assessed value (less $7K if you occupy the property as your home). My new bill is based on my adjusted assessed value of $591,506. Your bill will have different amounts, but the percentages will be the same. I’ll express these percentages as the taxable amount per $100K of assessed valve, just to make comparisons easier.

Keep in mind that the annual increase in your AV property tax is the combination of two factors. The first is the change in the percentages discussed above. The second is the annual increase in your assessed value, which is capped at two percent under proposition 13. This year my assessed value rose the full two percent, and yours probably did, too. That means the AV proportion of my property tax bill rose 5.2 percent, for a total of $402, which is a combination of the  two-percent increase in AV (from the lower right section of your property tax bill), and the change in the AV percentages (from the left hand column of your bill).

On the right hand side of your property tax bill are the “Fixed Charges and/or Special Assessments.” These are generally referred to as parcel taxes because they are same for each parcel and don’t vary with the assessed value (there are some minor exceptions). There are two new items here (highlighted). The first is the Albany sidewalk tax that was approved by Albany voters on the Nov. 2016 ballot. For me the tax amount is $38.64, but it will vary depending upon your lot size.

The second item is Measure AA, a measure that I consider regressive and regrettable. I blogged about it here. It’s basically a Robin-Hood-in-reverse scam that takes $12 annually from Bay Area property owners, rich and poor alike, many living miles from the Bay. It then funnels most of the money to Silicon Valley to beautify Bay views for some of the wealthiest high-tech corporations in America.

All the other items remain the same. Some are adjusted for inflation, some are not. Overall, the amount of parcel taxes that I pay rose by almost exactly $90, and that figure should be about the same for all Albany homeowners. As I predicted in my previous post, I now am paying more than $10K annually in property taxes for my 1,100 sq. ft. Albany bungalow. Other folks in town are paying far more than that.

Albany’s soda tax, passed by the voters in Nov. 2016, is now in place.The tax revenues are beginning to stream in. It’s still a little early to get a sense of how much money the tax will bring in annually over the next several years.

I was the only council member not to support the tax (here and here). I thought it was another one of those feel-good measures that lacked a solid policy foundation and was based on wishful thinking. My recent casual survey of soda prices in Albany confirms this. I encourage you to take your own surveys as you shop for food to see what you discover.

One goal of the soda tax was to raise prices of sugar-sweetened beverages (SSBs) like sodas and canned teas. Excluded from the tax were juices (although they often “naturally” contain more sugar than soda) and sweetened dairy products like chocolate milk (our state’s powerful diary lobby made sure those items weren’t taxed). The idea is that the tax would be applied to SSBs at the wholesale level, and retailers would would then faithfully pass along the cost increase by raising only the price of SSBs.

One exception was the new Safeway Market at the top of Solano in Berkeley, where the old Andronicos was located. That Safeway store did have special stickers to distinguish between the two types of soda. For example, a 12-pack of regular Coke was $1.44 more expensive than a 12-pack of Diet Coke. (A 12-pack contains 144 oz. of soda, so with the SSB tax of one cent per ounce, the tax totals $1.44.) However, Safeway often has club-member or two-for-one discounts, and those sale prices are the same for regular and diet sodas.

The Albany City Council never had the authority to tell retailers what prices they could charge. And today, it’s difficult to know which other goods have been marked up to cover the wholesale cost of the soda tax. But I think it’s fair to say that the council has effectively imposed a tax on food, which was not the intent of the soda tax.

During the next several weeks, the council will be discussing how to spend the soda tax revenue. It should be an interesting discussion, since the amount of revenue raised, unlike in our much more populous neighbor to the south, won’t be enough to start any major new programs. Because the SSB initiative was written to require a simple majority vote, and not a two-thirds supermajority, the SSB tax revenue cannot be earmarked and must be put in the city’s general fund. Perhaps the council can use it to enhance some existing programs.

There are a few more items I’d like to cover, but this is enough for now. I’ll to blog again soon.