First of all, I want to apologize. During the run up to the recent election, I did not pay enough attention to the details of the Albany Unified School District (AUSD) measures B and E. As I stated previously on this blog, as a former school board member, and a current city council member, I didn’t think it was my place to initiate a conversation. That was my mistake.

In the last week, I have been pouring over the information and building my own spreadsheet models, something I learned to do many years ago when I was a state economic analyst. I have come to the conclusion, with some frustration, that the voters were not given clear information about how much measures B and E will cost them.

For example, take the number that was tossed around before the election–B and E together would cost no more than $180/$100K of assessed value. It turns out that figure is misleading. It’s better to think of the $180 figure is a floor, not a ceiling.

So have a seat, take a deep breath, and let me start by giving you a few numbers. According to school district estimates, over the next 30 years, our town will be responsible for paying off $223 million of school district debt, an average of $7.4 million per year for 30 years. A large part of this total, $148 million, is due to Measure B alone.

To be fair, the voter guide did mention this figure in the the analysis of Measure B. However, the implications for individual Albany homeowners were not made clear either in the vote guide or in the information that I have found on the school district’s website. In what follows, I do the best I can to provide that information.

In this spreadsheet model, you can plug in your 2017 assessed value and the view the graph of how your AUSD property taxes evolve over time. The detailed explanation of how I created this model, with its upper- and lower-bound estimates, is on the “narrative” tab. Click on the “data and graph” tab to see the information there.

For example, if you are a new homeowner in Albany who just paid $1 million for a little house, your assessed value is the sale price. You will be paying AUSD-related property taxes of $2,500 to $3,000 annually for 30 years. During the next three decades, you will pay a total of $75,000 to $90,000 to retire AUSD debt. 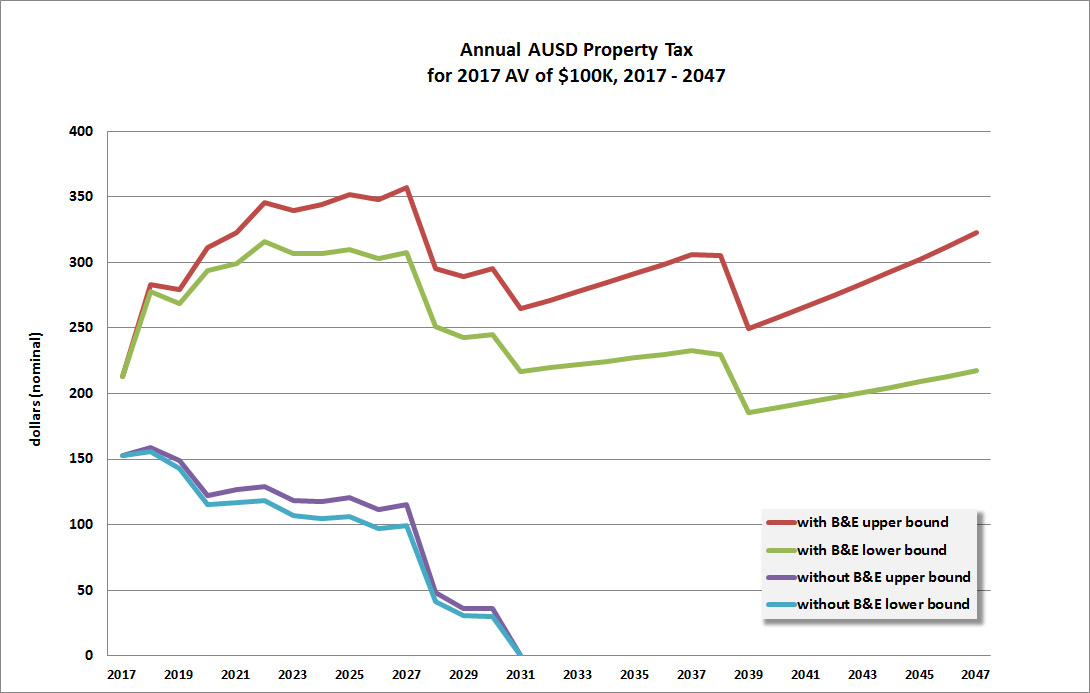 The graph above (click to enlarge) is from the model. It assumes $100,000 of assessed value in 2017. The red line is the upper bound estimate of annual property tax payments for AUSD’s combined total debt service (CTDS) for the three existing bonds and Measures B and E. The green line is the lower bound. The purple and blue lines show what AUSD’s debt would look without measures B and E. The three older bonds are paid off in 2030, and Measure E is paid off in 2038. Measure B is paid off in 2047.

I can’t say for sure, but I don’t think this is what many Albany voters were expecting when they voted in favor of measures B and E. The supporters of the measures B and E had very little incentive to set the record straight.

As a city council member, I don’t have much incentive to set the record straight, either. Albany voters would be more inclined to support city tax measures in the fall elections if they didn’t know what’s coming.

But as an Albany homeowner with a $600K assessed value, and one who is planning on retiring in a year, I know I am feeling resentful. Not so much about the big dent that measures B and E and will put in my early retirement years, but because there has been so little information provided about their financial consequences.