Albany resident Catherine Sutton sent this photograph to me (see below) to point out that farming was taking place on the Gill Tract sometime in the past. But when? There is nothing I appreciate quite so much as a local history challenge (see this as an example, although the text is a little garbled), so here goes:

But first, I must warn you that I spent many happy hours in the darkroom as a teenager growing up in Alaska (what else was there to do all winter, except ski?), and I am familiar with the history of B&W photography and technology. Also, way back in economics grad school, I wrote a few papers on the economic history of 19th century grain harvesting implements, so I am a bit familiar with that topic, too. So here is the photo in question, sent to me by Ms. Sutton, which I have enhanced in photoshop: 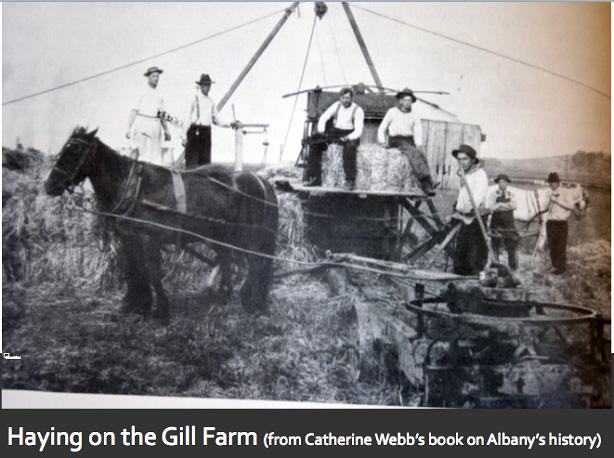 OK, for the sake of argument, let’s assume this photo was taken on the Gill Tract, or at least on the land that eventually would become the Gill Tract (although other than the caption, I have no evidence of this). What can we say about when the photo was taken? Mind you, I am not referring at all to the source (that’s no fun). Rather, I am asking based on our knowledge of photographic technology, farm technology, and the style of dress of the men, can we narrow down the range of years in which this photo could have been taken?

We know from my previous post that the Gill Tract was purchased in 1890, and construction began on shipyard worker housing in the 1940s. So it is extremely likely that these photos were taken well before 1940, and perhaps even before 1890. My best guess is that these were taken before WWI, based on the farm implements, the quality of the image, and the dress of the men. But you may disagree.

Some good information is available here and here on the history of mechanization of farm equipment. The main point in that by 1900, mechanization was well underway, including the technology of baling hay. The modern farm tractor was developed in the 1920s (recall the lament of the Great Depression that tenant farmers were being “tractored off” the land. Or see the beginning of the movie version of Steinbeck’s “The Grapes of Wrath”).

My favorite piece of early harvesting equipment was the Marsh Harvester, patented in 1858, see the beautiful illustration here. Several more illustrations are available on the web, just google it if you like. Based on comparison to the Marsh Harvester, the level of technology in the Gill Tract image seems pretty early to me, perhaps around the turn of the century. In the image there are horses but no tractors, rudimentary equipment, but nothing that looks terribly sophisticated even in comparison to the March Harvester of 1858.

Our next piece of evidence comes from looking at the washed-out sky in the image. It could be that it was just one of those infernal foggy summer morning that we get so often in Albany, but I think there is a better explanation. Early photo emulsions were only sensitive to relatively energetic blue light. That means in 19th-century photos, the color blue photographs as white, while the color red photographs almost as black. See here for an example.

This explains why the Civil War photos of Matthew Brady almost always have washed-out skies. Even suntanned white officers have an odd burnished quality to their skin tone in the Brady images, see here. This effect is even more pronounced in the Edward Curtis images of American Indians, even in images of children. Here is just one of many wonderful images. Even if this child was dark-skinned and tanned, if she had a reddish hue to her skin, she would have photographed even darker. Again, note the burnished quality to her skin, which is typical of blue-sensitive photo emulsions.

The Gill Tract image above has the classic washed out sky of many 19th-century photos, and the image quality seems comparable (if that) to the 19-century images of Brady and Curtis (although an original print could look much sharper, hard to say). This leads me to suspect the Gill Tract image is also very early. Later B&W films used special dyes in the emulsion that made them sensitive to all colors of visible light, and in those photos, the sky is often dark enough to see clouds. Photo techniques that were only sensitive to blue light survived in the form of photo booth images (again skin tones had that funny dark, burnished quality), and early photo copiers–red ink showed up better than blue ink.

Another good comparison is to the amazing body of work of the Farm Security Administration photographers in the Great Depression. The most famous of these photographers was Dorothea Lange, and her most famous subject was Florence Owens Thompson.The story of how her identity was discovered is pretty darn interesting (click on her name to view it). In general in the FSA photos, note how much the image quality has improved since the 19th century, and note how the clothing is different in the Gill Tract photo above. This Dorothea Lange photo is a good example. A quick check of WWI images (easy to find via google) reveals the same thing.

So I have come to the conclusion that the Gill Tract photo is quite old, probably early 20th century, or even late 19th century, possibly even before Gill purchased the Gill Tract land in 1890. But again, you might disagree.

There remains one issue. In the photo hay is being harvested.  Hay is typically not grown on rich bottom land. For example, if you visit the Salinas Valley, Steinbeck’s stomping ground, you see lots of lettuce and other vegetables, and even some wine grapes, but you don’t find any hay. Hay is grown on drier, more marginal soils.

So if, as the Occupy the Farm (OTF) folks have asserted ad nauseam with their tired cliche, it is the case that the Gill Tract contains “class one agricultural soil,” why was hay being grown on it? I suspect the current quality of the soil is due to the years of hard work of competent UC and USDA researchers. Sadly, hard work and competence are not the words that come to mind when I think about OTF.