Due to some recent information that has been passed along to me about Albany’s local history, I’d like to discuss the Gill tract again, in particular its “class one agricultural soil.” By the end of this post, I hope you agree that as far as the Gill tract goes, we’ve flogged this horse to death. Since getting there will involve a few long quotes, I’ll save my thoughts on some other big items for the next post, which I’ll finish soon. But first, here are some updates on current issues:

The AT&T cell site at 1035 San Pablo Ave. is finally working, after too many years of delay. I tried it out myself, and I could get good reception with my old AT&T phone along both of Albany’s two biggest streets, Marin and San Pablo (I pulled over, of course). Reception near city hall seemed good. Cell sites were also approved in Kensington.

I am as frustrated as anyone with the delays in getting bulb campers into our transition shelter and placed in housing. There will be a flurry of activity in January, but until the court documents are public, there isn’t much more that I can say. My apologies, but as I often complain, the public’s business moves behind closed doors once the lawsuits start flying. Some information is available here and here.

A five-story affordable housing project for seniors has been approved in El Cerrito. The 63-unit project, located on a large parcel that was formerly a furniture store, will include a clinic and retail space. This is exactly what I’ve had in mind for Albany, but it would be difficult to find that large a space here.

In my recent posts on the Gill tract, I have discussed evidence that shows the tract never was a farm, but a rose nursery. And if part of it was farmed, it was about a century ago. Now another shibboleth about the Gill tract—that consists of “class one agricultural soil”—can be tossed aside.

First let me distinguish between two different definitions of the Gill tract. The original Gill tract was purchased in 1890 and consisted of 104 acres of land, bounded by the railroad right-of-way to the west, Buchanan Ave. to the north, San Pablo Ave. to the east, and the Berkeley border, formed by Codornices Creek, to the south. Note that the current Albany City Hall, including the police and fire station, sits on the far NE corner of the original Gill tract, because Buchanan Ave. was rerouted on a curve to join Marin Ave. at San Pablo. 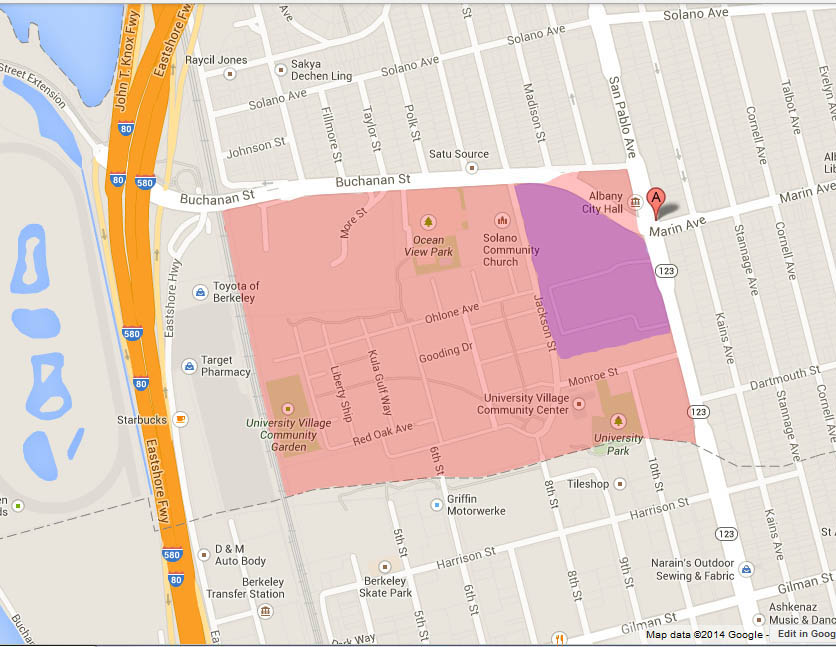 The current Gill tract occupies about 15 acres just south and west of city hall, bounded by Jackson St. on the west, the new Buchanan Ave. to the north, San Pablo Ave. to the east, and the fence line to the south that separates it from the old Codornices housing area. The fence line parallels Monroe Ave.

The mixed-use project consists of assisted-living senior housing south of Monroe Ave. and a supermarket north of Monroe Ave., in the area where the old Codornices housing was located along San Pablo Ave. The plan for the supermarket does have it extend north of the fence line into the current Gill tract, into an area where there is no cultivation, but where some trees will have to be removed or relocated.

Many thanks to Albany resident David Sanger for uncovering some interesting comments by UC agricultural leader Claude B. Hutchison (1885-1980), who was the first head of what would become UC’s Division of Agriculture and Natural Resources. Hutchison discussed many California agricultural issues for an oral history project of UC Berkeley’s Regional Oral History Office (ROHO). ROHO has some fascinating stuff on everything from early Portuguese immigration to the biotech revolution.

Hutchison’s oral history can be found near the bottom of the page here. The full text in pdf form can be downloaded, but the file is quite large. Here is an excerpt concerning the original Gill tract, recorded in December 1961:

Anyway, it [the Gill tract] was bought mainly for the use of the College of Agriculture. But only a small portion of that tract is good soil, the rest of it is a rather heavy adobe clay. But despite this and up until World War II I was still expecting that that tract would over the years become more and more useful to the college. But with the outbreak of war, the federal government commandeered a major portion of it and built war housing on it for shipbuilders at Richmond and more or less ruined it for agriculture purposes. We might have dug out all the concrete and so on like we did with the foundations of the old houses on the Oxford tract, and restored it to agricultural usefulness, but again, by reason of further developments at Davis and the need of the University for housing purposes, a major portion of the Gill tract will never be used again for agricultural purposes.

And we’ve had to struggle against the pressure on the part of the city of Albany which at one time wanted to run a street through it to extend Marin Avenue on a curve coming into Buchanan Street, and there’s been a demand for part of it for a school site. It is awfully hard to maintain a farm in the city because of various pressures. As I read the picture of the future it’s only a question of time until the college will have to give up its use of the Gill tract—maybe we can retain a small part of the area because we have built some greenhouses there and other physical facilities and maybe these can be held for a while. In the long run I think the chances are that the College of Agriculture’s work there will be closed up, particularly if at the same time the work here on the campus is transferred to Davis.

As mentioned above, Albany did link Buchanan and Marin streets, and now city hall sits on what used to be the far NE corner of the original Gill tract. The school site he mentions is AUSD’s Oceanview elementary school.

So the old Codornices area of Albany Village, where the mixed-use project will be built, isn’t composed of “class one agricultural soil” after all. Preserving that soil for farming has been one of the main justifications for the trespassing action there last spring by Occupy the Farm members and their supporters.

That there is plenty of clay soil around (like my yard) doesn’t come as a surprise to many local gardeners. Nor it is a surprise to USDA soil scientists. You can use the online map feature here to discover that the Gill Tract’s soil is classified as 148–urban land-Clear Lake complex. The program downloads slowly. Here is a screen shot: 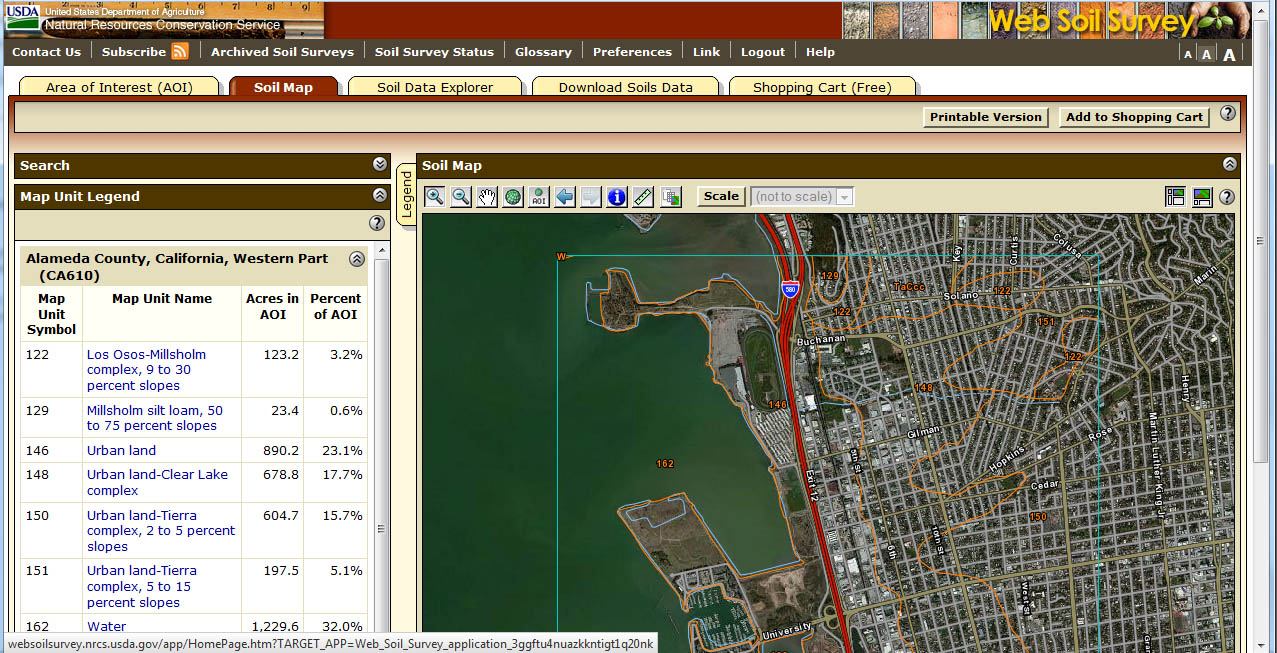 For more information, you can see pages 25 and 31 of this 1981 USDA soil survey, but it is another big pdf. The two relevant pages are here in pdf format. I quote from them below:

From page 25:  148-Urban land-Clear Lake complex: The Clear Lake soil is very deep and poorly drained. It formed in alluvium that derived mainly from sedimentary rock. Typically, the surface layer is very dark gray, neutral and moderately alkaline clay about 37 inches thick. The underlying material is dark gray and grayish brown, calcareous clay and silty clay and extends to a depth of 60 inches or more… Adding organic matter to the soil can improve the rate of water intake, aeration, and soil tilth. Capability classification not assigned.

From page 31:  Capability classification shows, in a general way, the suitability of soils for most kinds of field crops. The soils are classed according to their limitation when they are used for field crops, the risk of damage when they are used, and the way they respond to treatment… Class I soils have few limitations that restrict their use.

I found an older, but helpful, soil map of Alameda County from 1977. Given the variety of soils in Alameda Country, it is hard to believe, as stated in a recent Eastbay Express article, that the Gill tract “is some of the best soil in the East Bay,” according to Occupy the Farm spokesperson Lesley Haddock. Claude Hutchison, someone who actually knew what he was talking about, didn’t agree.

I agree the current 15-acre Gill tract is most likely good soil, but that’s not where the mixed-use project will be built. Because of the decades of careful research and continuous cultivation of the current Gill tract, including plowing under crop residues at the end of the growing season to increase the organic matter in the soil, it makes sense that the soil there is good.

As for the section where the Codornices housing existed until just a few years ago—it’s just a vacant lot, with the same old clay soil that many of us find in our backyards and crawl spaces.

If the OTF at times seems to wander aimlessly about one corner of our little town, it’s because they are chasing something that never existed. The original Gill tract was never a farm. It was a nursery. But “Occupy the Rose Nursery” doesn’t have quite the same ring to it. And if OTF members and their supporters can’t find more “class I agricultural soil” where the mixed-use project will be built, that’s because there isn’t any.